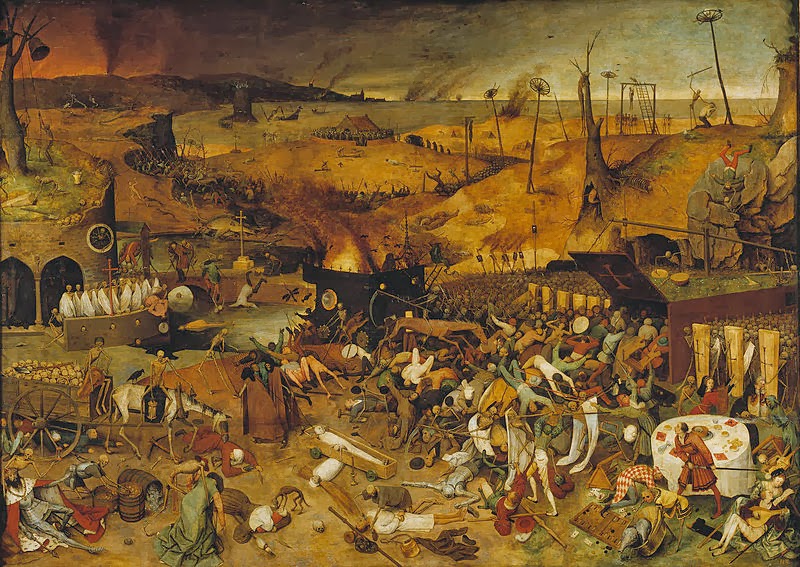 The cover art for The First Vial was taken from this painting by Pieter Bruegel the Elder. Called The Triumph of Death, Bruegel painted it in the mid 1500's to be a reflection of the social upheaval and terror following the devastation of the medieval plague.  Our cover can be found in the lower left corner of the painting. The top right hand corner has an almost futuristic feel about it. Perhaps it may even be considered a little prophetic as the plague was thought by most to be a scourge of the past yet still materializes from time to time. Today, with early detection and treatment, antibiotics can kill the bacteria that causes plague, saving its victims.

The artist did not focus only on macabre scenes like this one. He was given the name 'Bruegel the Peasant' for allegedly dressing up like a peasant. This disguise allowed him to mingle at weddings and other peasant celebrations in order to gain inspiration and authentic details for paintings such as the one below, The Peasant Dance. STUDENTS HAVING FURTHER QUESTIONS NOT ANSWERED PREVIOUSLY MAY ASK THEIR QUESTIONS IN THE COMMENTS SECTION BELOW THIS POST.
Posted by Linnea at 9:24 AM

Linnea
My first love is writing and my historical novel, The First Vial, was published in 2005. Much to my surprise it was nominated in 2006 for a young readers' choice award by the Ontario Library Association. After a devastating house fire I lost all my research material and first draft for my second historical novel so am still slogging away at that. My other passion is gardening and I live in a challenging northern zone with my husband and our little dog, Spencer.